At some point in the history of the world, John Lewis created their first Christmas ad. I’m not talking about the ad being released to the public but on a more conceptual level, there is a moment in time where the idea for the annual emotional rollercoaster began. In his novels, Terry Pratchett utilises the notion that in the universe inspiration particles are simply flying around, waiting to pass through someone’s brain which would eventually lead to the invention of the toaster or the creation of the Mona Lisa. While that is all well and good, coming up with concepts is much more difficult and time consuming than simply being in the right place at the right time.

Before getting into any form of process, let’s make something clear: there is no such thing as a bad idea (well, yeah there is but for the sake of dramatic effect, there isn’t). At any stage of concept creation, we write down any ideas that spring to mind because you truly never know what might come in handy later on. Although a lot of these notes may turn into food for the shredder, one-line concepts might end up becoming the building blocks for the current project while others act as guidelines into what we should not be doing.

MAKA’s Creative Director Matthew James Ellul created a concept which helps with the creative workflow: the six days of concept generation (which needn’t necessarily last six days, most of the time it doesn’t). The first step is to look into the client’s brief; not just reading through the specifications but to peruse the document, to understand what it is the client wants from this particular production.

Every brief is different. Varying levels of detail can be found between one brief and another, so piecing together the client’s aims can sometimes be trickier than it sounds. There is also the problem that different briefs have different structures, different layouts, making the decoding that extra bit longer, but the effort is worth it; it is impossible to create a concept if you don’t know what the client is looking for in the first place. Once the foundation of goals is in place, the rest of the research will build up from there (figuratively speaking, of course, or else we would need a permit).

An insight into concept creation with our Creative Director Matthew James Ellul.

What is it that you are advertising? Be it a product or a service, we ensure that we know what it is we are actually pushing. This not only helps us see the ins and outs of the product/service but opens up new avenues in the highways of electrical pulses in the city of our creative brains. We become the consumer, seeing the product and getting to ask ourselves what it is that would push us over the edge, putting our money where our (collective) mouths are. A unique selling point is all well and good when it’s on paper in black and white but seeing the practical uses in action bring an extra level of depth into the idea and, eventually, the final production.

Looking into a client has a two-pronged approach: who is the client and, secondly, who are their competitors? Figuring out who the client is goes hand in hand with the brief; not only are you reading what they aim to achieve from their new advert but you can physically see their previous commercials, giving insight into their style choices,company ethos, and branding. Many briefs might ask for something “new and fresh”, so looking into previous ads help show you what the client likes while, in this case, showing you what not to do.

A client’s competition is just as important as the client itself. Gaining an insight into the current commercial landscape of that sector allows us to see where the ad is going to be finding its future home, outlining what works and what doesn’t. Knowing what both local and foreign competitors are using to sell their products helps in creating a concept that won’t be alien to potential clientele while also finding a way at setting the client apart and above the rest.

After looking at all the above-mentioned criteria, we were able to create a piece that fit the mould while also having a unique perspective.

5. Communication with the team

Throughout the process, the assigned Creative Director schedules meetings with the Production Manager and any other relevant departments to check up on the process of the idea and to make sure we are on the right track. But, relying on these meetings for an outside point of view can be damaging; after working on a concept for two days straight only to realise it doesn’t fit is a bit hard to hear. Therefore, relying on the rest of the team for a little chat goes a long way. By interrupting someone else’s work and dumping your problems onto them and labelling it as ‘teamwork’ when they tell you piss off is an excellent way at finding any holes in the boat and plugging them before it’s too late.

Finding an idea doesn’t end at the finding, but it needs to be beefed up into a full concept that can be presented and defended without any hesitation. Being that advertising is a visual medium, we fill in the gaps between the words by creating visual references, mood boards, basic storyboards, costume and casting guidelines; anything that can turn the written text into a photographic one.

Meetings are held with cinematography, casting, production, and costume departments; people who expect a clear vision for the end product. Internally, we strive to create the idea of the product similar to an outline of an image that just needs to be coloured in on set with cameras and crew (easier said than done). 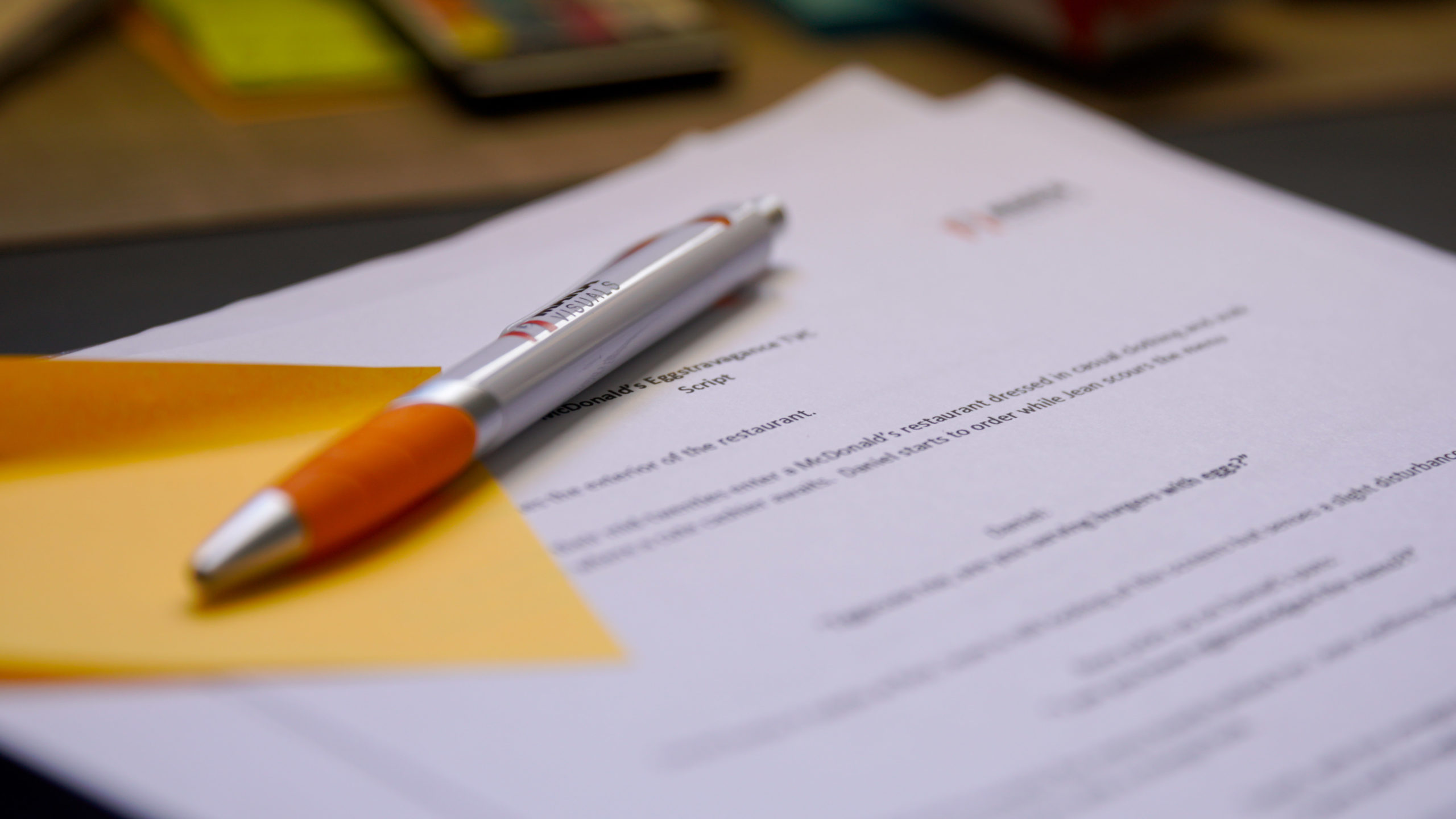 If the idea is the bones, the treatment is the meat and the presentation is the hungry customer.

A concept ceases to be a singular notion during the creation of the treatment in the same way an advert ceases to be abstract during the presentation. We could have the most ground-breaking concept in human history, but it means squat if we can’t sell it to the client. Focus on communicating the idea to the client, highlighting how it fits the brief like a glove, where all the moving pieces are going to go, how the budget is going to be used efficiently; in simpler terms, everything.

‘Teamwork’ is imperative at this stage. By walking into the office, any and all colleagues have automatically offered themselves to the greater good, dummies for practice pitches so kinks can be hammered out and what potential questions are going to be asked before we even put the batteries in the laser pointer. This moment is what we have all been waiting for so before you shake the clients’ hands with your clammy palms, remember all the preparation and swing for the fences (or do a terrible job of it and let us know, so we can swoop in and get the gig ourselves [I have been asked to clarify this is a joke, so here it is.]).

Branding: The Importance of Creating a Name

Branding: The Importance of Creating a Name